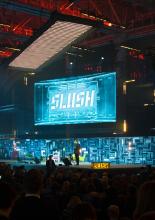 Around 15.000 people filled Helsinki Convention Centre last Wednesday and Thursday due to the celebration of Slush 2015, the greatest event about entrepreurship in Europe. For the third consecutive year an Argentinian delegation comprising five start-ups attended this event as part of a mission organized by the Foreign Ministry and the Embassy of Argentina in Finland. The Argentinean startups that took part in Slush 2015 were Kids Corp, Quilsoft, Shovel Apps, Twendency and WinCalp.

Helsinki Convention Centre got filled of ideas and projects and Argentinian entrepreneurs took active part in the business agenda motivated by the possibility of finding strategic partners and establish trade ties.

The Argentinian startups, all of them from the technology sector, had individual booths in which they showed their corporate image and country brand. Through them they tried to gain a foothold in a highly competitive and dynamic environment in which they managed quite successfully: their booths received large numbers of people and aroused great interest among those attending.

"Events of this significance make you keep working because you get an idea of the market size and the opportunities that are in it," ensured a member of Kids Corp yesterday.

Moreover, four of the five Argentinian startups had the chance of taking part in the pitching competition, one of the activities with the greatest impact at Slush. The pitching is a unique opportunity for the companies to make themselves known as only 100 of the 1,700  startups gathered at the event could participate. The audience of this activity was mainly composed of investors. Besides, there was a specialized jury which would choose a winner among the 100 contestants, someone who would be awarded with an equity investment prize of 650,000 euros.

The Argentinian entrepreneurs greatly appreciated the event due to the quality of the contacts they made. Therefore, all of them said they would take part in another mission or event of this kind organized by the Argentinian Foreign Ministry. "We congratulate the organization team and their decision to invest in these business efforts," said a member of Twendency, "we recommend them to follow this same path and deepen in it in order to support more Argentinian startups in the future in order to increase sales and stimulate the implementation of Argentinian technologies abroad."