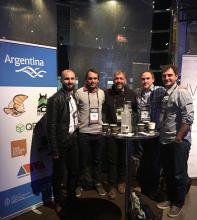 A delegation of four Argentine entrepreneurs, all of them from the video game sector, participated at Slush 2016 in Helsinki, Finland.

More than 17.000 people filled Helsinki Convention Centre last Wednesday and Thursday during Slush 2016, the greatest event about entrepreneurship and technological innovation in Europe.

The companies shared a demo booth where they could chat with potential strategic partners and make contacts to establish business links.

After Slush, Peter Vesterbacka, Founder of Slush and former Marketing Director at Rovio -developer of the famous video game Angry Birds- organised a post event in order to facilitate the contact between the Argentine entrepreneurs and other key figures within the entrepreneurship scene both in Finland and worldwide. This event was took place on Friday 2nd at Startup Sauna and it was an excellent oportunity for the Argentine delegation to share their experiences and knowledge face to face with investors and other entrepreneurs.

At the end of this last event, the Argentine entrepreneurs rated their visit very positively. "We have been able to explain our project to different investors, the experience has been truly amazing", explained Guido Corsini, from QW9 Entertainment.

They also highlighted the benefit to Argentina of "being able to bring projects like ours" to Finland because this "gives another vision of Argentina, since we are not only exporters of commodities, but also developments -in our case, video games- with high added value," Corsini explained.

On the other hand, Augusto Petrone, from The Other Guys, claimed he would return to Buenos Aires "with an incremented motivation to continue innovating and learning from others".

Julián Callens, from Dedalord, showed his enthusiasm regarding the development of the visit and thanked the Government of the City for the opportunity to attend Slush, which allowed him "to meet many investors and other developers extremely interesting".

Martín Cao, from NGD Studios, participated in a pannel organised at this post Slush event, where three pannelists talked about the startup ecosystem in their home countries (China, Finland and Argentina). Cao described the event as "very productive, especially on Friday, when we met with Peter Vesterbacka, many entrepreneurs and other very interesting figures with whom we exchanged comments about our experience".

Slush is a platform that allows its participants exposing their business projects to a large number of angel investors and other entrepreneurs with whom they will eventually be able to work with.

In this way the ties between our country and Finland are strengthened,  which is especially relevant being the Finnish one of the most outstandings business ecosystem in Europe. Agustín Kelly said that "it is very important to create a bridge between Finland and Argentina" and he stressed the importance of attending to Slush.

"Slush is Europe's most important event about technology and high-impact entrepreneurship," said Kelly. "We are going to keep working with Finland because we believe that we have many possibilities to collaborate between the two countries and, above all, the City of Buenos Aires," the official added.