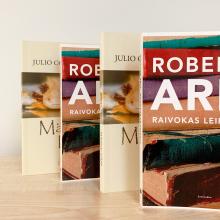 With a view to foster a desire to discover works of Argentine literature and thinking abroad, Ministerial Resolution N° 41 of 2 February 2009 implemented a Translation support programme to promote and strengthen the publishing of such works in foreign languages.

Some of the main features of PROSUR are:

These works can be chosen from within the different literary genres and they may be by both classic and contemporary Argentine authors, whose themes are representative of the country’s national identity.

The Programme was launched as a result of the commitment made by the Argentine Government to promote the translation of works by Argentine authors so as to encourage their printing in foreign languages and to disseminate our imagery, ideas and values abroad.

Since it was created the Programme has awarded more than 1.210 works translated into 45 languages.

The Publishing House will be required to complete the project with the publication of the work. This publication must be completed by 30 November of the year following that of the invitation. The time period in which to present requests for grants will be from 15 February to 30 September every year.

The Argentine publishers, the authors of the works or the agents who own the copyright can act on behalf of the foreign publishers, but payment is always made to the latter.

The works must have been written in Spanish by Argentine authors and must already have been published. The works can be of fiction or non-fiction, and of any literary genre (novel, short story, poetry, drama, children’s literature, etc.).

Receiving a grant under the Translations Programme is incompatible with the receipt of any other type of public grant for the same work in Argentina. The amount of the grant may not exceed USD 3200 per work.

A Selection Comittee made up of university specialists on Argentine literature María Rosa Lojo and Alejandro Dujovne, the Director of the National Library Mr Alberto Manguel, well-known literary journalist Mr. Ezequiel Martínez, the member of the Fundación El Libro Mrs María Teresa Carbano, and the Director of Cultural Affairs Ambassador Sergio Baur, selects the works to be translated from among those presented and assigns a certain amount of money to each one, according to its characteristics.

The application form for translation support may be obtained from the Committee’s web page and from the Diplomatic and Consular Representations of the Argentine Republic. The publisher may present the application for translation support and the required documentation at the Reception Desk of the Ministry, or of the Diplomatic and Consular Representations, or may send it by registered post: