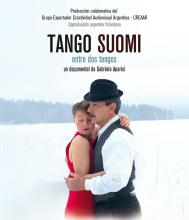 Tango Suomi, a documentary directed by the Argentine director Gabriela Aparici, arrives to Finland in September and will be screened in several cities and festivals around the country.

Tango... can also be Finnish. In Argentina we know little about this country and their culture, we usually think of them as a completely different society, and yet we don’t even know they have their own Tango.

In my journeys through that beautiful country I found that link we share and decided to explore it, to go and unravel the mistery behind the Finnish Tango not only as a musical or dance expression but also to find the meaning of this music for this particular country in which I found myself interviewing musicians such as MA Numminen or tango lovers like Pertti Mustonen, who has the music in his blood, and after all this I found that despite the distance between our two countries we are more than kindred spirits.