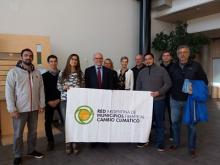 The Argentine Network of Municipalities Against Climate Change (RAMCC) visited Finland on October 19, 20 and 21 with the aim of learning about the Finnish public policies for sustainable development, as well as creating and strengthening cooperation between the participants and green technology companies.

The participants of the RAMCC delegation, composed by municipal representatives and officials, attended the agency for export, investment and tourism promotion Finpro. After that they visited Viikki Environment House.

The delegation also visited the Technical Research Centre of Finland VTT and the startup Enevo, specialised in waste collection.

On the last day of their visit to Finland, they visited the City Hall of the city of Lahti and they held a brief meeting with the mayor Jyrki Myllyvirta at Sibelius Hall. Finally, the members of the RAMCC delegation took part of a technical visit to Kujala Waste Centre and to Kymijärvi Power Plant in Lahti as well.

While in Helsinki, the RAMCC delegation also met with representatives of the Embassy at the Official Residence of the Ambassador.