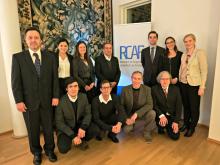 While in Helsinki, Minister Barañao and Mr. Jordan were received by the authories of the Technical Research Centre of Finland (VTT), the Finnish Funding Agency for Technology and Innovation (TEKES) as well as the Institute for Molecular Medice of Finland (FIMM). In addition, Minister Barañao met with the Permanent Secretary Anita Lehikoinen of the Ministry of Education and Culture and the President of the Technology Academy Finland, Juha Ylä-Jääski.

During their visit to Finland, Minister Barañao and Mr. Jordan also met with the representatives of the Network of Argentine Scientists in Finland (RCAFi), a group founded in 2015 together with the Argentine Embassy and within the framework of the RAICES Program of the Argentine Ministry of Science, Technology and Productive Innovation.

The objective of the visit was to discuss the different possibilies to enhance the scientific-technological cooperation between Argentina and Finland.