Argentina presented the outer limits of its Continental Shelf 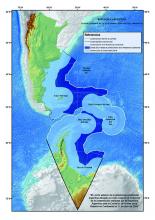 "This is a historic occasion for Argentina. We have taken a major step towards demarcating the outer limit of our continental shelf—Argentina's longest border and our boundary out into humankind," said Foreign Minister Malcorra, currently on an official trip, during a video screened at the beginning of the ceremony, adding that "This reaffirms our sovereignty rights over the resources of our continental shelf: minerals, hydrocarbons and sedentary species."

Malcorra continued to explain: "The Commission on the Limits of the Continental Shelf, a scientific body comprised of 21 internationally renowned experts, created pursuant to the United Nations Convention on the Law of the Sea, adopted by consensus—that is to say, with no votes against the proposal—the recommendations on the Argentine presentation. Argentina's case has been recognized as a 'leading case'."

The Foreign Minister also informed the following: "The surface area in the demarcation presented, extending between the 200 nautical miles and the outer limit, is approximately 1,700,000 sq kilometres- the equivalent of around 48% of the land territory of the Argentine Republic. This adds to the approximately 4,800,000 sq kilometres comprised between the baseline and the 200 nautical miles limit." I firmly believe that this is a very important achievement in Argentine foreign policy."

Deputy Foreign Minister Carlos Foradori chaired the presentation panel that gathered at the Palacio San Martín and held: “In short, this is a sovereignty powerhouse, which is silently but constantly generating. I would like to highlight that this has been an intentionally designed policy -not an accident. It has been implemented even during the worst days in our economic history."

In response to inquiries by the press, the Argentine Deputy Foreign Minister stated that "Nobody can take exclusive credit for this achievement- it is the result of the work of the Argentine people. It can be said that this has been a seamless foreign policy as it has been consistent throughout. It was consciously designed with extraordinary scientific support. This is a highly significant achievement, the conclusion of a historic project, and the result of team work. All Argentines should be proud. This is a reflection of Argentina's unity."